My Tape Library Has the Hiccups 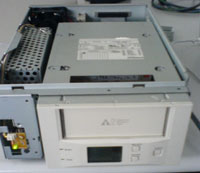 Every once in a while the Sony TSL-SA500C AIT-2 tape library monster I am using for backups swallows a tape. It’s calling for help with cryptic error messages on its display (something similar to “Tape drive error 00444382”), decides that I may not eject the tape magazine or (even better) ejects the magazine with only three (of four) tapes in it and afterwards whines that I am inserting a “not full magazine” (well, If I gave you a full magazine, you had five tapes in your stomach… Glutton!). So my part is to dis- and reassemble it and try to get the tape out of its hungry mouth (a.k.a. tape drive)…

Fortunately I will be running out of backup disk space in a few months (if my users keep collecting/creating large amounts of data as they do at the moment) and so I ordered a new nice Sony tape library with 1.6TB of storage, this should be enough for a while.